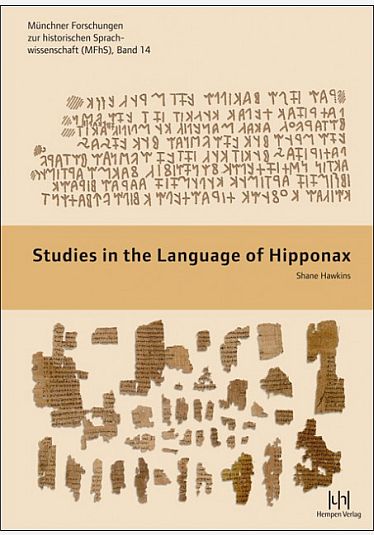 Shane Hawkins: Studies in the Language of Hipponax. Bremen (Hempen) 2012.

This book is a historical and comparative study of the language of Hipponax, a Greek poet of invective verse who lived in Ephesus in the middle of the sixth century BCE. Many factors invite the linguist to take a close look at the surviving fragments of his poetry, including a creative use of language that is coarse, parodic, barbaric, and sometimes delightfully obscene, his distinctive meter, and his relish for lexical rarities and foreign words borrowed from neighboring languages. The four chapters of the book cover the alphabet and matters related to letter forms, phonology, morphology, and loanwords. Throughout the book the author offers original solutions to linguistic, historical, and textual problems, while also touching on a range of issues such as performance, genre, style, religion, and myth. Shane Hawkins is Associate Professor of Greek and Roman Studies at Carleton University in Ottawa, Canada.